The Castle of Parga

The Castle of Parga 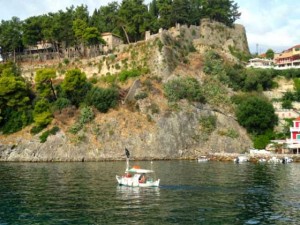 The castle of Parga is found on the top of a hill overlooking the town and was used to protect the town from the mainland and the sea.

It’s present form is the result of the major reconstruction at the end of the 16th century.

In 1360 the Pargians in order to avoid the attacks of the Albanians transferred their village which was far from the sea to its present location. During that period, with the help of the Normans who held the island of Corfu, the fortress of Parga was built.

In 1401 a treaty was signed with the Venetians, and the rule of Ionian Islands passed to them. The Venetians respected the lifestyle of Pargians who provided in turn, invaluable assistance to the fleet of the Venetians

In 1452, Parga and the castle was occupied by the Ottomans for two years during which time part of the castle was demolished. Then the Venetians came back. In 1537, the pirate Hayreddin Barbarossa burnt and destroyed the fortress and the houses within.

Before the reconstruction of the castle in 1572 by Venetians, the Turkish destroyed it once again. The Venetians rebuilt for a third time a perfect strong fortress that stayed impregnable for centuries. They built eight towers outside the Castle and two cisterns to supply the Castle with water in times of war. Inside the narrow space of citadel there were 400 houses, located in a way so that they occupied only a little room, far away from the seaside.

On this castle the free-besieged population of Parga and Souli fought epic battles and kept their freedom for centuries. From the faucet “Kremasma” the tanks of the castle and the houses were provided with water. The castle for it’s provision used the two bays: of Valtos and Pogonia.

In 1817, following a treaty between Britain and the Ottoman Empire, the British granted Parga to the Ottomans. This resulted in the Good Friday of 1819 where 4,000 Pargians having with them the ashes of the bones of their ancestors, their sacred images, flags and a handful of soil from their homeland, exiled themselves in the British protectorate of Corfu where they settled

When Parga was sold to the Ottomans, Ali Pasha enhanced it even more and put on its top its harem and its Turkish bath, improving radically the rooms of the castle.

On the arched gate of entrance, on the wall, you can see the winged lion of Agios Markos, the name “ANTONIO BERVASS 1764”, emblems of Ali Pasha, two-headed eagles and relative inscriptions. Archways, gun emplacement rooms, supplies lodges, strong bastions with gun safe boxes, safe boxes of small arms, secret passage to the sea, barracks, jails, warehouses and two block-houses at the last defense line: prove the perfection of the defense plan, which along with the natural fortification made the fortress unconquered

Today, the Castle of Parga is a great exponent of the Venetian architecture, as such architectures dominate. It has some interesting details, such as the Lion of Venice in the entrance, emblems of Ali Pasha, two-headed eagles, some inscriptions and a secret path to the sea. The location of this castle obviously provides magnificent views over Parga and the shoreline. It is also a peaceful area to go for a walk, surrounded by cypress trees and crossed by stone trails. There is a café inside the castle that offers drinks and snacks, in case you get tired, as well as some interesting gift shops to buy souvenirs. The most common way to go is a steeped street coming out from the centre of the town.