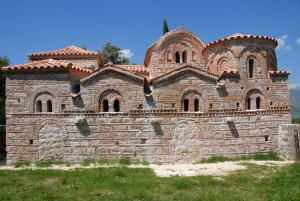 The Monastery of Agios Dimitrios is on the right bank of the kokitos river , 2.5 km NE of the village, Kypseli. It’s the only Byzantine monastery on Municipality of Parga on the Prefecture of Preveza, dedicated to Saint Dimitrios. From the Monastery of St. Demetrius preserved the Ledger, the Bank, the ruins of the cells and auxiliary rooms that probably date back to the 17th or 18th century. The Monastery in accordance with the style of construction that refers to building of the Despotate of Epirus, at the end of the 13th century, while the partially damaged inscription which it bears, indicates the name of Michael B Duke, as a founder or officer of this Michael Zorianos.

The Katholikon in the Monastery of St. Demetrios, consists of the nave and an ambulatory surrounding it at three sides and ending in chapels which flank the Sanctuary. The two chapels are incorporated into the North and South side of the Katholikon, with a common vestibule where they communicate between them with a door and Sacred Steps while above these there are eight sides domes. In the middle of the western side of the arcade from the Monastery Agios Dimitrios rises a low tower. The low stone chancel screen bears Paintings of the 17th century.

The 8th Ephorate of Byzantine Antiquities, with extensive work from 2004 to 2007 carried out the restoration and conservation of the authenticity of monument.