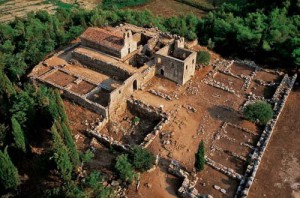 The Nekromanteion was an ancient Greek temple of necromancy devoted to Hades and Persephone.  According to tradition, it was located on the banks of the Acheron river in Epirus, near the ancient city of Ephyra. This site was believed by devotees to be the door to Hades, the realm of the dead. The site is at the meeting point of the Acheron, Pyriphlegethon and Cocytus rivers, believed to flow through and water the kingdom of Hades.

In the Sanctuary goes the ancient by offering libations (libations, offerings) to the dead to communicate with the souls and get various information, after suitable preparation.  Ritual use of the Necromanteion involved elaborate ceremonies wherein celebrants seeking to speak to the dead would start by gathering in the ziggurat-like temple and consuming a meal of broad beans, pork, barley bread, oysters, and a narcotic compound. Following a cleansing ceremony and the sacrifice of sheep, the faithful would descend through a chthonic series of meandric corridors leaving offerings as they passed through a number of iron gates. The nekyomanteia would pose a series of questions and chant prayers and the celebrants would then witness the priest arise from the floor and begin to fly about the temple through the use of Aeorema-like theatrical cranes.

The Necromanteion functioned until 167 BC when it was looted and destroyed by the Romans and it was inhabited again in the 1st e.X. century. In the excavations that have been made in the region have collected important findings. From an architectural point of view the Nekromanteion is identified with majestic mausoleum to the East of the 5th century.
It consists of polygonal masonry, iron gates, internal division with corridors construction that serves the worship and the rituals for the gods. The main sanctuary is a square building with sides of 22 m. length and is divided with two parallel walls in a central room and two small in side. Includes main hall, corridors, reception rooms and staff rooms preparation, the warehouses in which were preserved jars with the offerings of visitors, the maze and the actual shrine. Below the central hall is another underground chamber carved in the rock, the roof of which rests on fifteen limestone arches.

During the excavations were found heaps of broad beans, similar to the egyptian field beans, and several lupines (vetches). This broad beans have toxic properties, and when eaten cause gas, indigestion, easing the senses that reaches up to dizziness and hallucinations with allergic syndromes. So, with the relaxation of the senses, that was often the extent of dizziness, created the necessary conditions for communication with the souls of the dead.

In the excavation of the central chamber of the idols, in addition to many other findings, they also found a mass of iron wheels, a large copper boiler, and around scattered bronze wheels pulley and castanets. They belong to a system of machine (pulley), which could uploads and downloads a significant weight. An archaeological site discovered in 1958 and excavated during 1958-64 and 1976-77 was identified as the Necromanteion by archaeologist Sotirios Dakaris based on it’s geographical location and its similarities to descriptions found in Herodotus and Homer. However, its topographical situation on a hill commanding the immediate neighbourhood does not fit this interpretation and the ruins dated to no earlier than the later 4th century BC.

It’s now also believed that the site was a fortified farmhouse of a sort common in the Hellenistic period. Besides quantities of household ceramics, the site produced agricultural tools and weaponry, including Roman pila from the final destruction of the site by the Romans in 167 BC. Most surprising of all were 21 washers (the distinctive bronze modioli) from at least seven different catapults, which Dakaris had mistakenly identified as components from a crane.